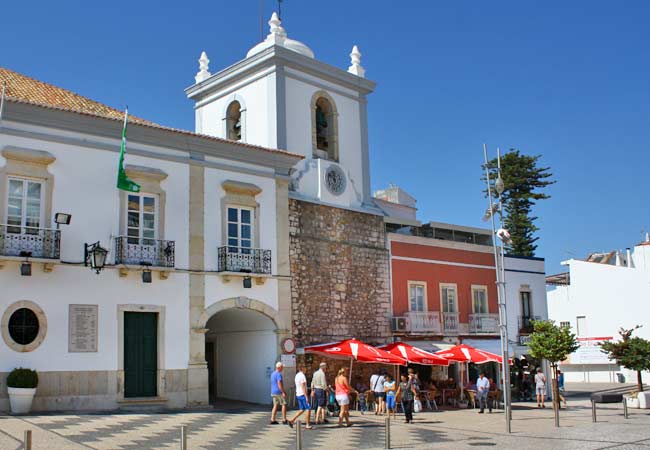 Visiting Loulé is rarely on the priorities of the “must – visit” lists for those who are in the Algarve. But there are reasons to visit it: its medieval historic center, the archaeological, architectural, and cultural source of Arab influence in the region, and the busy streets full of character and personality.

Loulé is a city distinct from all other cities in the Algarve and the “genuinely Portuguese atmosphere”, as foreign tourists perceive it, attracts more and more visitors. Another advantage it benefits from is its proximity to Faro airport.

Add the picturesque villages, such as Alte or Querença, dotting the beautiful natural landscape of Serra do Caldeirão and the glamor of the most luxurious seaside resorts on the Algarve coast, the famous Golden Triangle.

The city itself is not a beach destination, but at 15 km are some of the best beaches in the Algarve . This makes it possible to maintain much of the normal daily life of a city that does not live exclusively on bathing tourism.

The city has a more commercial nature, being less popular than Lagos or Tavira. However, this allows – to also maintain more authenticity in the cultural traits of everyday life in the Algarve, and this is its greatest asset – valia.

What very few people know is that the municipality of Loulé has excellent conditions as a nature destination for outdoor activities, as walking and walking paths . And Loulé is still one of the world’s leading destinations for golf, with excellent services.

The best time of the year to visit Loulé is characteristically summer ( June to September ) because of the great musical and cultural events he receives. However, from spring to autumn it is an ideal destination for exploring the picturesque villages of the Serra do Caldeirão and the Barrocal Algarvio, especially in the time of almond blossom.

Schedule your visit to coincide with a Saturday morning. It is the strong day of the Market that fills newsstands and the streets adjacent to the weekly market of the city that converges here. In addition to seeing the most alive city, it also participates in an authentic cultural event of trade in fresh and traditional products from the region. There is also the gypsy market in front of the Convent of Santo António, where it is still customary to practice – if the art of haggling, at Moroccan.

Strong point of the city’s annual calendar, the Loulé Carnival is already famous beyond – borders. Less glamorous than that of Venice and intense than that of Rio de Janeiro , it is true, but the, the colorful glow of floats and exuberant costumes earned – the place of the most famous procession in Portugal. The Corsican stage is on Avenida José Costa Mealha.

The greatest pilgrimage of Marian devotion south of Fátima takes place in Loulé, every Easter Sunday and 15 days later at the Greater Feast of the Sovereign Mother with processions, pilgrimages and solemn religious celebrations. Linked to ancient maternity rituals, everything happens between the city in the valley and the Sanctuary of Nossa Senhora da Piedade on the hill.

In June, the historic center of Loulé receives music from the world at a festival with its own identity. Music is the main engine, but the festival is an immersion of culture, art and world folklore.

Agosto receives musicians from all over the world who bring jazz rhythms and their jam sessions to Loulé castle.

Still in August, this is the big night party where entire streets in the city center, visitors and artists dress – if entirely white for a special party night, music and animation.

The Best of Loulé in One Day

City with strong historical characteristics, from its origins in the Iron Age to Arab civilization, we set out to discover a wide range of monuments, typical houses and unique alleys. We propose – a daybook in Loulé with the best points of interest in the city.

The municipality of Loulé has much more to offer. On the coast consider Vilamoura with its spectacular marina, the beaches of Portfolio

Loulé is inserted well inside the Algarve barrocal and a Serra do Caldeirão is a popular destination for nature tourism and hiking lovers. In fact, Loulé has better trails and walking paths from the Algarve, such as Fonte Benémola TA

Because of the excellent natural environment, historical testimonies and the dynamism of volunteers and institutions, Loulé became an official part of the Caminhos de Santiago in 2017, with the Central Portuguese Way of the South that connects Faro to Almodôvar, being the Algarve municipality with the longest route.

The offer of bedtime in the city of Loulé is not much. If you want to stay overnight in the city, you will have to book well in advance as the availability of accommodation quickly runs out. Consider booking accommodation closer to the coast where there is ample supply.

We advise Loulé Jardim Hotel , is a favorite of ours because it is in a quiet place, it has a very inviting rooftop pool and buffet breakfast that satisfies the palate.

Loulé Coreto Hostel has very economical prices and the quality of the accommodation exceeds the expectations of guests.

Dom Fernando II is in front of the Municipal Market, right in the center of the action. Some traditional rooms with a balcony overlooking the city. There is a restaurant on the lower floor.