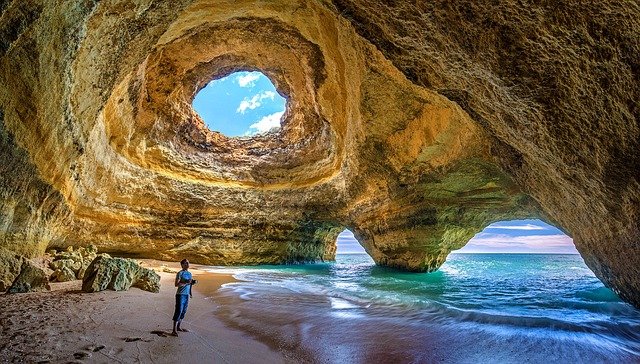 the most touristic natural attraction in the Algarve?

Benagil Cave, have you heard? We bet you have seen this photograph of the Benagil Cave in several places and you wonder why. It is indeed of the most beautiful places in Portugal. The coast of the western Algarve is especially fertile in algares (vertical caves). The Benagil algar is one of its most beautiful. That is why on a trip through the Algarve it is mandatory to visit the Benagil cave.

Since an early age, Algarve has been a mandatory stop for me at least twice per year. Get to know this region through insider tips, and discover it like a local!

Algars are vertical cavities in limestones where water takes advantage of the rock’s weaknesses, namely cracks and diaclases, and begins to erode these materials. Water mixed with atmospheric carbon dioxide is the main erosive agent of limestones, causing the dissolution of calcium carbonate. In this way, the cavities begin to grow and resemble wells. These are called dissolution algars. However, the number can increase and, due to lack of support base, it can cause a reduction of the top, creating a bell-shaped algar, as it appears to be Benagil. This type of algares is called abatement algars. Algarve algares are especially spectacular due to the presence of salt water and the combined action of marine abrasion with the chemical erosion of limestones. A geomorphology that is seen, felt and that deserves to be understood and admired from inside, from the air and from the surface. Algars are also caves, only they are predominantly vertical caves. And the most beautiful of all is the Algar de Benagil or Benagil cave.

HOW TO GET TO THE BENAGIL CAVE?

The Benagil cave is located in the municipality of Lagoa, in the Algarve, close to Benagil beach and a few kilometers from Marinha beach and Vale de Centeanes beach. If you like trails and hikes, these are some of the best trails you can do in the Algarve:

HOW TO VISIT THE BENAGIL CAVE

It is best to visit the cave early in the morning, at lunchtime, or at the end of the day. Of these three options, the best is the first, either by the light or by the possibility of meeting a few people in the Benagil cave. You could do it for example when doing the Seven Suspended Valleys trail. One of the best times was actually during the pandemic 🙂 At that time there were very few visitors to the Algarve and, therefore, there was almost no one in the Benagil cave. But apart from these special occasions, the Benagil cave always has a lot of people (tourists mostly).